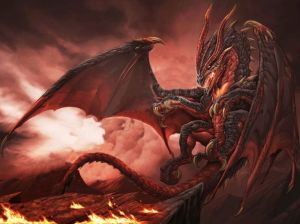 This is my response to Sherry Marr’s questions from a chat interview we had at Poets United. People are curious about my dragon poems so I have put only my part of the conversation here, along with the links to the pieces we discussed that day.

here, but for me, there be dragons

This is the first time I put the dragons into my poetry. It is the title piece of a small chapbook I created, which was all about writing poetry. The image is a pen and ink drawing I put on the back cover. I knew, from my History classes, that when the first explorers returned to their home ports, they had numerous maps that were then turned over to cartographers. After assembling the explored areas, the map maker would write in those areas that hadn’t been explored, here there be dragons (or monsters).

I was playing on those words. By that time, I was long out of school, and had begun tutoring certain individuals about writing, believing I had conquered my own fear of being vocal about my truths. In the poem, I claimed the dragons as mine. I guess they took me seriously, because they began to appear in dreams and spontaneous imagery. There were several of them, like

I saw the dragons as a natural outgrowth of my Personal Mythology, which had been in place since before my years in College. The story of that creation may be found here:

I began to deal with them in a like manner. Their particular physical appearance and their names were clues as to their purposes and meaning. The color of the dragon is important because it identifies the lessons she/he has come to teach. The image of Neosafalus is a free coloring page, found online. I colored it with India Ink. He was purple, and for me, that means personal power.

The name is also important because it speaks to the dragon’s purpose. I didn’t have to go beyond that first prefix, because neo means newly arrived. I had been involved in a Grammy Nomination that had brought me into the spotlight on a local level, and had opened the doors that allowed me to give one-day workshops, and the tutoring experiences, and eventually to teach at two local colleges.

Dialogue With My Dragon

This poem was written toward the end of an April poem-a-day challenge. I was tired, as I was also giving word prompts based in some of my old pieces. Maranathaheth was in my head, as the words for that day had come from the “here, but for me”… poem. I had done internal dialogue pieces before and they were well received. So, I typed in the first lines, and then stalled. Same old, same old…people would think I’m nuts, gone round the bend, etc. My daughter stepped in and gave me focus and that is in the notes that follow the poem.

I wanted to express how much her presence means to me, and how important our relationship has been, even though it is imaginary. Dragons have gotten a bad wrap in Western culture. They seem to be seen as the Ultimate snake in the Garden, needing to be destroyed. A dreaded part of the human shadow within the psyche. But, in Oriental culture they are seen as benevolent beings, bringing gifts and prosperity to the human race. When you destroy a piece of self, you destroy the possibilities for further growth.

I got to my sense of the dragons through several avenues. 1. The Anne McCaffrey series about the Dragon Riders of Pern. 2. The movie Dragonheart, starring Dennis Quaid, with Sean Connery as the voice and personality of the dragon. 3. The Dragon Tarot, with the express purpose of self-exploration, not divination. 4. My continuing personal study of human behavior and how it develops.

That last one is, perhaps, the most important one. We develop a world view, a sense of the world, how it works, and our own role within that world by the time we are five years old. Rudimentary at best, but it remains the filter through which we develop our responses, including our coping mechanisms, to deal with whatever frightens or threatens our well being. Those coping mechanisms are the dragons, come to protect us as children. However, they remain in place and can prevent further growth, unless we make friends with them, and allow them to teach us how to grow beyond mere reaction, and into our full potential.

So, Marananthaheth has a sibilant lisp to remind me of her origins. But, she also has a loving and nurturing nature, wrapped up in a need to see me prosper. She is red, the color of Creative Fire. She is my imagination, that which allows me (and her) to continue to grow. My desire, when writing the poem, was to make her as genuine and as likable as possible.

I don’t think this one needs an explanation. I like the 13 ways form and thought it was time to use it for the dragons, but especially Heth.

Any questions you might have may addressed to me at my email address:

Hope you enjoyed and thanks for reading.