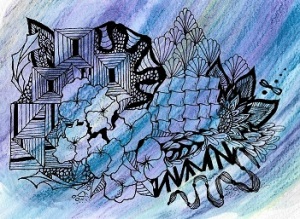 I…entered the poem of life
almost forty years ago.
A bit old for a beginner.

For those first thirty-plus,
believed that poems
were foreign land
a stranger’s language
locked and forbidden
to likes of me.

No one familiar
ever spoke of such things:
meanings that doubled-down,
twisted round, then turned left
instead of right, where they
normally belonged.

But, gentle stranger smiled
and offered a key. Tip-toed
across that threshold, crept
through those lofty corridors,
no more than a ghost
in hopes of not being seen.

Forever captured by a world,
where I’m not supposed to be.

Footnotes: Opening line is first phrase in a quote from Barbara Blackman’s autobiography Glass After Glass. Blackman is an acclaimed Australian writer. The full quote appears as an introductory note on Rosemary Nissen- Wade’s poetry blog, The Passionate Crone.
http://passionatecrone.blogspot.com.au

Every time I visit Rosemary’s site, I read that phrase, and it pulls me in, and words start churning through my head. I decided it was time to follow them.

Image is a pen and ink line weave drawing with a water color wash. Another strange world.

Loves words and language. Dances on paper to her own inner music. Loves to share and keeps several blogs to facilitate that. They can be found here: https://1sojournal.wordpress.com/ https://soulsmusic.wordpress.com/ http://claudetteellinger.wordpress.com/
View all posts by 1sojournal →
This entry was posted in April PAD Challenge: Day 8 and tagged Barbara Blackman, belong, ghost, Glass After Glass, inspiration, PAD Challenge, Rosemary Nissen-Wade, strange land, threshold. Bookmark the permalink.