On Being A Woman Who Writes 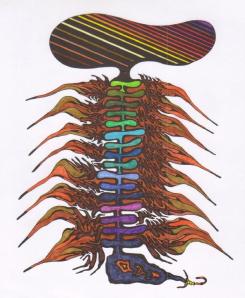 On Being A Woman Who Writes

Although ritual and tradition
create an illusion of safety and security,
they seem incapable of allowing
past to become a path to present,
or to grow any kind of future. Perhaps
even damaging the possibility of either
or both.

Would much prefer to write
about harmony found in life lived
as ongoing, ever growing, sacred choice.
But reality continues to rush in, making
that thread ragged. Unraveling its thinness
to the point of almost broken.

As a woman, I have been silenced
by ritual and tradition. Taught my ‘place’
by ancient dictates created out of fear
and lack of love, or any true knowing.
Hemmed together only by desperate
need to prove superiority, making me
what they fear most: a woman breaking
those bonds of silence.

Notes: It was Freud who said that words are magic, carrying a peculiar power, and although not a particular fan of the man (being far more Jungian, if I must have a label), I have long believed the same. Words are used to define, but can also realign one’s trajectory or focus. I should have realized that this particular list of words could bring me to this place. They were taken from a poem, I wrote, which may be found here: https://soulsmusic.wordpress.com/2012/10/28/a-list-poem-about-why/
It is a poem listing the reasons why I write and begins with the same premise as this current piece. I write to break the silence that has bound all women for far too long. My defining moment (if one needs such a thing) came in 1979. I was married, had three children, and was expecting a fourth, but was also deeply engrossed in reading novels by Chaim Potok. When I found out that he had published a new book: Wanderings: Chaim Potok’s History of the Jews , I immediately set my sights on purchasing and reading said volume. It was hard covered (something I didn’t usually purchase), huge, covering four thousand years of History. And between its covers I found a deep abiding rage. There are only two female names mentioned in that History, and they are jammed together into one very short paragraph which amounts to a lip-service apology that Jewish History is after all, the History of Patriarchy. I slammed the book shut and threw it across the room, deciding that I needed to work off the lava now running through my veins. I would go out to the garden and weed. On my way outside, I passed my husband and his father working on a remodeling project. On hearing my reply to the question of where I was going, my then father-in-law, avoiding any eye contact with me, seriously asked my spouse, “Do you trust her to know the difference between weeds and the vegetable plants?” It goes, without saying, that I came very close to utterly destroying our oversized tomato patch that day, only restraining myself with the knowledge that the tomatoes had done nothing except be exactly what they were supposed to be. And perhaps, seeing the first fleeting glimpse that maybe it was time for me to do and be the same. When I went looking for an image to go with the poem, I came upon one of the first images I colored with fine art pens. It is a self-portrait and the back story concerning it’s creation may be found here:
http://1sojournal.wordpress.com/self-portrait/

Loves words and language. Dances on paper to her own inner music. Loves to share and keeps several blogs to facilitate that. They can be found here: https://1sojournal.wordpress.com/ https://soulsmusic.wordpress.com/ http://claudetteellinger.wordpress.com/
View all posts by 1sojournal →
This entry was posted in On Being A Woman Who Writes and tagged 1sojournal, being a woman who writes, Chaim Potok, History of Patriarchy, NaPoWriMo, poetry prompts, ritual and tradition, self-portrait, silence. Bookmark the permalink.

4 Responses to On Being A Woman Who Writes