Once Upon A Time Past,

For The Sunday Whirl: Wordle #69
http://sundaywhirl.wordpress.com/ 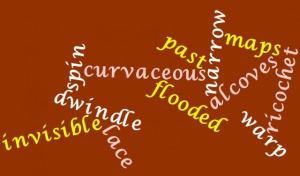 Once Upon A Time Past

Anonymous, or so we thought.
Three middle-aged students
sitting in narrow alcove,
adjacent to Women’s Center.

She smiles, nods, takes two more
steps, stops and turns back,
“You know, I always worry a bit
when I see the three of you
huddled together, laughing.”

We listen to dwindling footsteps,
suddenly flooded with realization
that we are no longer
invisible.

Notes: The woman on my right was the first appointed student director of The Women’s Center. The one on my left was the appointed liaison between the Center and the Dean’s office. I had been hi-jacked by those two to become the first volunteer student Advocate for the Center. The ‘she’, in the poem, was the Dean of the University we attended. When Brenda’s list appeared in my email, I saw the word alcove and was immediately lost in the memory.

About a year later, the dean called me to the stage on Honors Day to present me with the honors award for both the History and English departments. Holding my hand, so I couldn’t walk away, she announced to the waiting audience, which included my Mother, two sisters, and my children, that she had “seen Elizabeth playing cribbage in the Peer Support Office,” but, after seeing my GPA, would not recommend that anyone invite me to play poker. I squirmed, but laughed along with all the others.

Loves words and language. Dances on paper to her own inner music. Loves to share and keeps several blogs to facilitate that. They can be found here: https://1sojournal.wordpress.com/ https://soulsmusic.wordpress.com/ http://claudetteellinger.wordpress.com/
View all posts by 1sojournal →
This entry was posted in Once Upon A Time Past and tagged Dean, huddled and laughing, students, The Sunday Whirl, Women's Center, word puzzle, wordle. Bookmark the permalink.

23 Responses to Once Upon A Time Past,